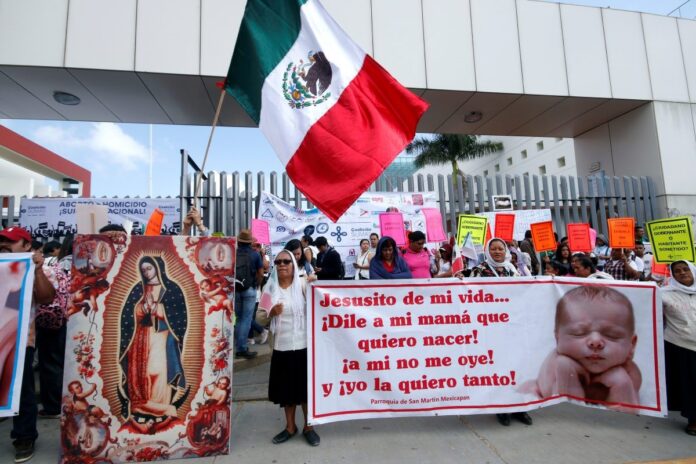 In a surprising move, a Supreme Court has not used its position to further abortion and impose an elite view on the population. Not in the US. Not in Ireland. In Mexico.

The Mexican Supreme Court over-ruled an injunction by the Veracruz state court which sought force the state government to remove part of its legislation that outlawed abortion. The Supreme Court judged, by 4-1, that the lower court was putting itself in the place of the legislature, trying to make laws, which it should not do.

Justice Pina said: “The court cannot replace the legislature to order specific legislative content, because there is no constitutional mandate to legislate,” according to the newspaper Reforma.

“The court would fall into judicial activism,” Pina added, “which would surpass its constitutional powers.”

It is highly unusual for a Supreme Court to demonstrate self-restraint, particularly in contrast to the Supreme Court of the United States which did the complete opposite nearly 40 years ago with the Roe v Wade judgement.

John Hume – needed now as much as ever

The passing of John Hume is a sadness for the island of Ireland. A great man who suffered in himself in the final years of his life, supported by his wife Pat, as he lived with dementia. John Hume provided an example to all about the need to talk to your opponents in order to find a way to live together in peace.

If only this approach could be taken in 2020 across the world in a world of Twitter, Facebook and all sorts of social media where division across so many walks of life is becoming the norm, where shouting past each other and not even at each other, is becoming the norm. It can be seen in the cancel culture of university and media life where instead of debating, people are banned from speaking. It can be seen in the United States where Democrats and Republicans are no longer able to dialogue – they do not even understand each other.

Jonathon Haidt wrote a book called The Righteous Mind, where he tries to understand why good people are divided. As part of his research, he tried to test liberals and conservatives to figure out which group understood the other best, and, surprising himself, he found that conservatives were better able to understand where a liberal progressive was coming from, but liberal progressives were less able to understand or appreciate that conservatives were well meaning. Division is increasingly driven by groupish righteousness where the other group has to be defeated rather than engaged.

It’s very confusing these days. The same people who want to defund the police are the ones who want sanctions against Poland under the guise of protecting law and order. Candace Owens, a black conservative woman, is called a white supremacist. Feminists are now bad people and called Trans Exclusionary Radical Feminists (TERFs) because they want women to be protected. Kindergarten Cop is now being targeted because it apparently paints police in a positive light. Fergus Finlay, former CEO of Bernardos and government advisor, can call people rodents in his Irish Examiner column, just as Hilary Clinton called the disenfranchised in the dustbowl US ‘a basket of deplorables’, and these people are considered civilised. The BBC can say Black Lives Matter protests in London were ‘largely peaceful’ after 27 police officers were injured. BLM protests in Ireland magically were not a risk in spreading coronavirus while small numbers attending Mass apparently are.

News in brief from home