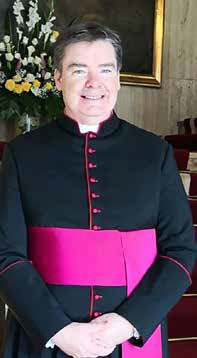 The Ballygiblin native, who began his career in the Diocese of Cloyne, has been appointed by Pope Francis to the diplomatic post in the African country Burkina Faso.

Archbishop Crotty was born on 26 March 1970 and was ordained a priest for the Diocese of Cloyne on 3 July 1994. He has worked in Kenya, Canada, Iraq, Jordan and Spain previously as well as having studied in Ireland and Rome. Archbishop Crotty will have a challenging task ahead in a country that has recently been savaged by war and violence, with over 600,000 people displaced, thousands of schools closed and Churches being burned down by Islamic extremists, in a country that was until recent years, relatively quiet and stable. So quiet, indeed, that many readers may be more familiar with its former name, Upper Volta.

Archbishop Crotty, on his appointment stated: “While being deeply honoured by Pope Francis’s decision to appoint me his representative to Burkina Faso, I am also profoundly humbled, conscious of the trust that has been placed in me despite my many deficiencies. I accept this new mission, in a spirit of obedience and gratitude, trusting that the Lord Jesus Christ, who calls me now to be a Successor of the Apostles, will be my guide and light in bringing the Good News of the Gospel, to wherever the Holy Father, the Successor of Saint Peter, chooses to send me.

“My gratitude at this time also goes out to all who have nurtured me in the faith: first and foremost, my late parents, Mary and Timothy Crotty, and my family; the faith community of Mitchelstown Parish – the clergy, Christian Brothers, Presentation Sisters, and particularly the teachers of Ballygiblin National School and Christian Brothers School, who taught the Catholic faith not only by word, but also by witness and example.

“I also would like to thank my brother priests of the diocese, and elsewhere, who have supported me throughout these past 25 years of priesthood. Finally, a special word of gratitude to Bishop William Crean of Cloyne, for the paternal care and concern that he has shown to the priests of the diocese of Cloyne, whether they be near or far, within or without.

“The Holy Father, mindful of the Irish monastic missionary tradition, has assigned me the titular See of Lindisfarne in the North of England, founded by Saint Aidan, a monk of the monastery of Iona founded by Saint Columba, Co-Patron of Ireland, with Saint Brigid and Saint Patrick. Through the intercession of these, and all the Saints, may God give me the strength to do his will.”