I did it God’s Way

Sadie Robertson, actress and New York Times best-selling author, told her fans after her recent marriage to Christian Huff, that they did it God’s way. “I have felt shame in dating relationships when I was doing it my way – I did not feel shame when I did it God’s way. God’s plan does not produce shame. I am not the poster child of purity. We both had a past, but when we met we made it clear that we desired to see what God’s plan was.”

“People ask how do you know when someone is the one? I have heard it said and I’ll repeat it – ask yourself is that person helping you: Helping you get closer to God and be a better person?”

Pope Francis gets the ‘green’ light 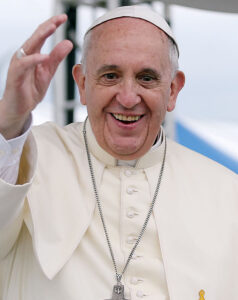 Italy is on Ireland’s Covid-19 travel green list and so Catholics will be delighted to learn that the Holy Father’s Papal audiences have got a green light also. Papal Audience are held to give pilgrims and visitors the chance to ‘see the Pope’ and receive the Papal Blessing.

The Vatican explains that the Audience with the Pope consists of small teachings and readings mainly in Italian but also in English, French, German, Spanish, Polish, Portuguese, and sometimes other languages depending on groups visiting.

Also, at the Audience the Holy Father will pray together with those attending the Audience. At the end of the Prayer, as Head of the Catholic Church, he will impart his Papal Blessing upon the crowd which also extends to loved ones that are sick and suffering. He blesses any religious articles such as rosary beads that people have brought with them for the purpose of the blessing. It is an all ticket affair, however, tickets are free.

Statue of Christ profaned in Poland

On the night of July 28th, LGBT activists profaned a historic statue of Christ standing in front of the Basilica of the Holy Cross in Warsaw, Poland. The statue was draped in symbols representing LGBT ideology. A manifesto was also placed beneath the statue, stating, among other things, that ‘this city (Warsaw) belongs to us’.

The incident resulted in tensions flaring. Concerned Catholics have volunteered to watch over and guard local churches. Meanwhile, an LGBT activist known as ‘Margot’ has been arrested by the police for physically attacking a pro-life campaigner who was vocal about his traditional views on marriage.  The arrest in turn sparked further protests by LGBT activists.

A July 28th article in the Christian Post reports an attack on 6 Christian families by Hindu extremists in Jharkhand state, India. The Hindus demanded that the Christians convert to Hinduism and when they refused they were tied up and beaten.

However, the Christians could not look to the authorities for support. The police refused to file a report, instead telling the horrified Christian families to convert or flee. The incident is an clear portrayal of the increasingly desperate situation of Christians in India who are often left without adequate protection.