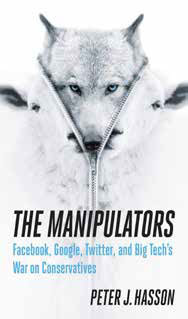 Internet giant Google has long faced accusations of bias against conservatives, and an upcoming book cites documents confirming that it takes action against right-wing content in direct response to complaints from left-wing activists.

Daily Caller senior investigative reporter Peter Hasson is the author of a new book, The Manipulators: Facebook, Google, Twitter, and Big Tech’s War on Conservatives. The Federalist published an excerpt from the book, focusing on emails Hasson obtained that shed further light on how Google makes such decisions.

He notes that there’s a profound double standard at play, as Google simultaneously promotes left-wing messages via its Creators for Change program, which supports left-wing personalities on YouTube while responding quickly to left-wing complaints about conservative content that is deemed objectionable.