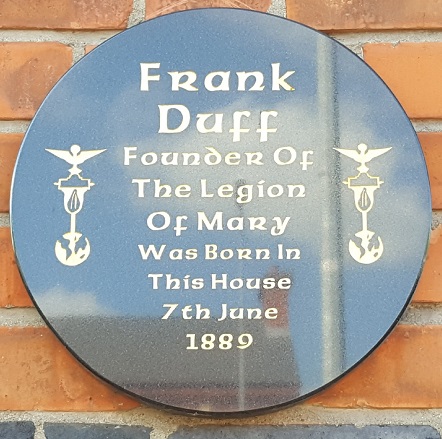 Calvary – “She seemed totally absorbed with inutterable grief. She was pale, and her eyes, without any more tears to shed, cast a dead look of the grief-stricken upon the frightful wounds of our Saviour … As she got nearer to her Son, she only had eyes for Him and was oblivious to foreign soldiers who made threatening signs to her. When they pointed lances at her breast, though, they saw lightning flash from her fixed and piercing eyes which was inherited from her royal ancestor, David. Those eyes expressed such sorrowful grandeur and cool contempt for death that the soldiers, perhaps fleetingly remembering their own mothers, lowered their weapons and gave way.

She stooped to pass her hand over the bloodied forehead of her Son. Her very existence with the living, at that stage, was through His Divine support. As His head was pushed down under the weight of the Cross, He managed to utter one word, “Mother”. As she heard that beautiful word – though like a death-knell to her – the Virgin felt a piercing pain through her heart. She collapsed onto the rough ground stained by her Son’s blood. She was raised to her feet by the ‘most-loved apostle’ and escorted by him and Mary of Magdalen to witness the cruelty of men’s minds – but also, a Sacrifice which produced, perhaps, the most recognised icon in the world, the Christian Crucifix”. (Author unknown – 19th century.)

One cannot write about the Legion of Mary without mentioning its founder, Dubliner, Frank Duff, and one cannot write about Frank Duff without referring to 17th century Saint Louis-Marie de Montfort of France, a major source of Frank’s understanding of the intercessional ability of the Blessed Virgin Mary, Mother of God-made-Man.

Louis-Marie Grignion, was born in Brittany, A.D.1673, the second of eighteen children. He possessed an inborn love of the Blessed Virgin Mary. Kneeling before her statue in a local Carmelite church, he felt the summons to vocation. A family friend provided financial support for his priestly calling but he had to walk 200 miles to study at Saint Sulpice, Paris, during which time he even guarded dead bodies at night to supplement his endowment.

Ordained in 1700, he eventually received a direction from Pope Clement XI to mission in France against the harsh moral rigourism of the Jansenist heresy. A competent orator and writer, among his best known books were ‘The Secret of the Rosary’, ‘The Secret of Mary’ and ‘True Devotion to Mary’, in which he was able to illustrate his ardent love for the Mother of God. Particularly in the latter, he demonstrated TOTAL dependence on Mary as the primary intercessor to her Son.

His writings inspired Frank Duff, two centuries later, to commence what has become one of the foremost and dedicated Christian organisations in the world. Frank, in his booklet, ‘The DeMontfort Way’, portrays Saint Louis-Marie as someone describing what he sees through a telescope to someone without that instrument.

”So, what is the purpose of the Legion of Mary?”

Saint Louis-Marie gave that answer two hundred years before that magnificent cohort was born with Frank Duff who said that it is to attempt ‘to make a saint of everyone!’  It takes an infinite amount of resilience and courage to initiate a conversation with another – perhaps a stranger – with a view towards pointing them towards sainthood – or even better spirituality!

Saint Louis-Marie wrote, “It is with her(Mary), in her and by her that God has produced His Masterpiece, which is God-made-Man, and which He goes on producing in the persons of His members daily to the end of the world.  This is the reason why He, God the Holy Ghost (Spirit), the more he finds Mary, His dear and indissoluble spouse in any soul, flies to it, and becomes the more active and mighty in producing Jesus Christ in that soul, and that soul in Jesus Christ”.

This filial bond of Jesus to Mary, described initially, with the inspiration of the Holy Spirit, has given wings to the development of the largest apostolic organisation of lay people in the Catholic Church which, with an estimated membership of ten million souls, will celebrate its centenary on September 7th, A.D. 2021.

We pray for that cause.