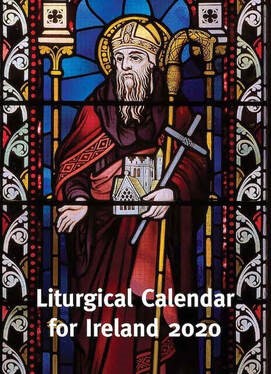 Easter Sunday Anno Domini 2021 will fall on April 4th.  This information – and much, much more – is included in the 2019/20 Liturgical Calendar for Ireland.

Published by Veritas Publications since the latter part of the 20th century, this booklet is to be found in virtually every Sacristy in Ireland and owned by anyone who requires – or is interested in – day-to-day information on designated Lectionary Readings for every day of the Church year.

Liturgy being the forms of public services officially prescribed by – in this case – the Catholic Church, this Calendar is an easy-to-reference ‘per diem’ of so many aspects and possibilities regarding the public celebration of Mass.

Known as the ‘Ordo’, or ‘Order’, a version in Latin was published since 1830 by James Duffy & Co. with premises in Westmoreland Street, Dublin. That company was founded in the early 19th century by Monaghan-born Mr. Duffy with emphasis on religious printed requirements.

Eoin O’Keefe took responsibility for the ‘Ordo’ from 1938 until 1984, including its transition into English in 1972 as the ‘Liturgical Calendar for Ireland’. Until 1978, it had been edited by the Reverend Priest Deans of Maynooth College. From that year on, the editorial responsibility fell to the late Very Reverend Brian Magee, CM, Parish Priest of Sunday’s Well, Cork City.  This very able County Armagh native had vast experience of teaching liturgy at a number of Catholic colleges in Ireland and, from 1978 until his death in August 2003, he worked with Veritas Publications, becoming the editor of the Liturgical Calendar for Ireland from 1984.

Father Magee bridged many gaps in available liturgy literature and was a pioneer of liturgical video material. One of his projects was a video version of the Stations of the Cross employing art pieces from Saint Vincent’s Church in his Sunday’s Well Parish. Father Magee’s last resting place is in a shared grave with fellow clergy at Saint Finbarr’s Cemetery, Cork City.

The current editor of the Liturgical Calendar for Ireland is Dubliner, Father Patrick Jones.

Apart from providing references for ‘Ordinary Week’ Masses, this pocket-sized book, also gives invaluable ready-to-hand information on major Solemnities such as the Easter Triduum and Christmas, those specifically celebrating the lives, earthly and eternal, of Jesus and His Mother, the Blessed Virgin Mary, and celebrations of the lives of saints.

Among the latter, as Solemnities, would be Saint Joseph on March 19th,  the birthday of Saint John the Baptist on June 24th,  Saints Peter and Paul on June 29th and Ireland’s Primary Patron, Saint Patrick, on March 17th.

Celebrated as feasts are days dedicated to the other apostles, to the evangelists, the three archangels, Michael, Gabriel and Raphael (September 29th) and saints related to specific dioceses, such as Saint Fachtna of Ross (August 13th) or Saint Laurence O’Toole of Dublin (November 14th).

The three main levels of liturgical celebration are solemnities, feasts and memorials and do not indicate any variation in the importance of those celebrated. Rather, the differences signify appropriateness of an aspect of a person’s life or relevance to a location.

Another example would be the special day for Saint Nicholas on December 6th. This may be celebrated as an optional memorial, as a feast-day in the Diocese of Galway or as a solemnity in Galway City.  A feast-day is deemed appropriate for celebrating the Dedication of Rome’s Lateran Basilica on November 9th.

This tome also includes concise descriptions of relevant saints lives, universal and Irish. The latter provides a means of ‘soft’ evangelisation through sharing with the secular media such events as the special day for Saint Cecelia, patron of musicians (November 22nd).

The Liturgical Calendar for Ireland is filled with an abundance of varied information from a special prayer for grandparents to the monthly special prayer intentions of His Holiness, Pope Francis. Truly a worhwhile purchase for anyone who wishes to increase their daily knowledge of liturgical matters. Between nine and ten thousand copies come on the market every year before Advent.

Veritas roots are with the Catholic Truth Society of Ireland, founded in 1899. Veritas opened its shop in Middle Abbey Street, Dublin in 1928 and has a number of outlets throughout the country, since.

An Túr Gloine and the Idea of Excellence

WHAT DO WE DO NOW, AND WILL IT WORK?

ABOUT US
ALIVE! is a free, monthly, Catholic newspaper which has been published continuously for over twenty five years. From humble beginnings of a few thousand copies being distributed in West Dublin, there are now over two million papers printed each year. Read more...
Contact us: editor@alive.ie
FOLLOW US
© Alive Paper
We use cookies to ensure that we give you the best experience on our website. If you continue to use this site we will assume that you are happy with it.OkPrivacy policy