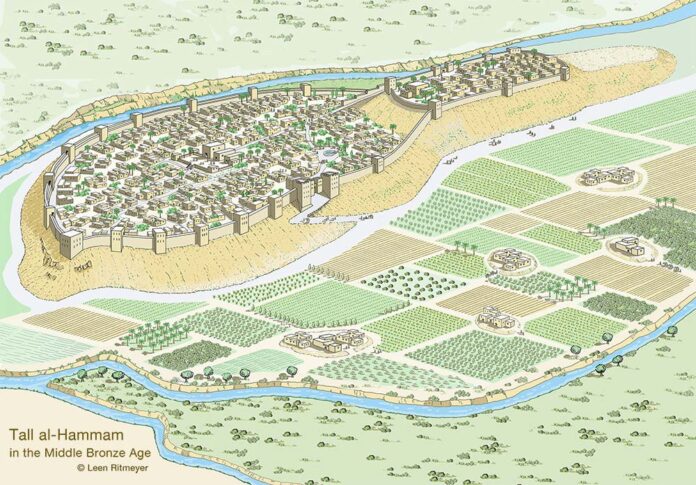 Last month’s article described why Dr Steven Collins thinks Tall el-Hammam, north of the Dead Sea, is the most likely site for Sodom.

Buried there is a very large Middle Bronze Age city – the time of Abraham and Lot – at 100 acres in the top 1 per cent of the area’s largest Bronze Age cities. It had as many as 25,000 inhabitants, a 12 feet thick city wall up to 35 feet high, and a colossal smooth-faced mudbrick rampart sloping 35 degrees away from the wall’s outer face for up to 150 feet.

Digging down, they found a Middle Bronze Age destruction layer of ash and rubble carbon-dated to 1700±50 BC. Above this was Iron Age 2 (about 10th century BC), skipping 600-700 years of the Late Bronze Age or Iron Age 1. This Late Bronze gap is odd as cities on crossing trade routes with abundant water and arable land were almost always rebuilt after catastrophe.

Pottery shards were excavated which an intense heat had turned one side into a greenish glass-like surface.  The heat was at least 4,000°C, far higher than man could make then. It was also brief, stopping before the whole shard became a pool of glass on the floor. The shards matched well to trinitite, the melted surface material left by the first atomic bomb test on the sands of New Mexico.

A possible natural cause is a meteor airburst similar to that at Tunguska in 1908. Other nearby cities show the same gap in occupation of 600-700 years.

But there are many places to excavate around the Dead Sea. In the last century its east coast or south were favoured. Why did Dr Collins choose this spot?

Now Abram was very rich in cattle, in silver, and in gold. And he journeyed on from the Negeb as far as Bethel, to the place where his tent had been at the beginning, between Bethel and Ai, to the place where he had made an altar at the first; and there Abram called on the name of the Lord. And Lot, who went with Abram, also had flocks and herds and tents, so that the land could not support both of them dwelling together…

Then Abram said to Lot, “Let there be no strife between you and me, and between your herdsmen and my herdsmen; for we are kinsmen. Is not the whole land before you? Separate yourself from me. If you take the left hand, then I will go to the right; or if you take the right hand, then I will go to the left.” And Lot lifted up his eyes, and saw that the Jordan valley was well watered everywhere like the garden of the Lord, like the land of Egypt, in the direction of Zoar; this was before the Lord destroyed Sodom and Gomorrah. So Lot chose for himself all the Jordan valley, and Lot journeyed east; … Lot dwelt among the cities of the valley and moved his tent as far as Sodom.

What can one see if one stands in the vicinity of Bethel and Ai, 12-15 miles north of Jerusalem?

The Dead Sea’s south coast is 60-70 miles away: too far, with a haze over the sea which obscures the view, and in any case blocked by high mountains on its western shore (19th century explorer W.M. Thomson).

“well watered … like the land of Egypt”: Egypt was well watered because of the river Nile. The alluvial plain north of the Dead Sea is in a similar situation. It is irrigated by the Jordan river which, descending south, then empties into the Dead Sea.

The word used for “valley” in Genesis 13 is the Hebrew kikkar, meaning something round (hear the likeness in our “circle”). And the plain north of the Dead Sea is strikingly circular on the map.

How accurate is the Bible’s geography? Dr Collins:

… if the Bible says that City Y lies between Cities X and Z, then that is certainly where City Y existed at one time. Proof of this: many archaeological sites in both Israel and Jordan retain their biblical names, and most were located and identified from geographical indicators found in the Bible.

So why did 20th century scholars not follow these same clues in Genesis 13?

It is no secret that many scholars have an aversion to using what they consider to be “religious” texts when doing archaeology. But this “anti-textual” position is illogical: every ancient Near Eastern text—whether Egyptian, Sumerian, Babylonian, Hittite, Canaanite, Assyrian, Israelite, Greek, Roman, Byzantine, or Islamic—carries within it a religious perspective and agenda foundational to that particular culture.

Thus, to disqualify a text simply because of its “religious” character is the epistemological equivalent of shooting oneself in the foot before a marathon.

More in Discovering the City of Sodom by Collins & Scott and at tallelhammam.com

China on the Heart of the West

ABOUT US
ALIVE! is a free, monthly, Catholic newspaper which has been published continuously for over twenty five years. From humble beginnings of a few thousand copies being distributed in West Dublin, there are now over two million papers printed each year. Read more...
Contact us: editor@alive.ie
FOLLOW US
© Alive Paper
We use cookies to ensure that we give you the best experience on our website. If you continue to use this site we will assume that you are happy with it.OkPrivacy policy