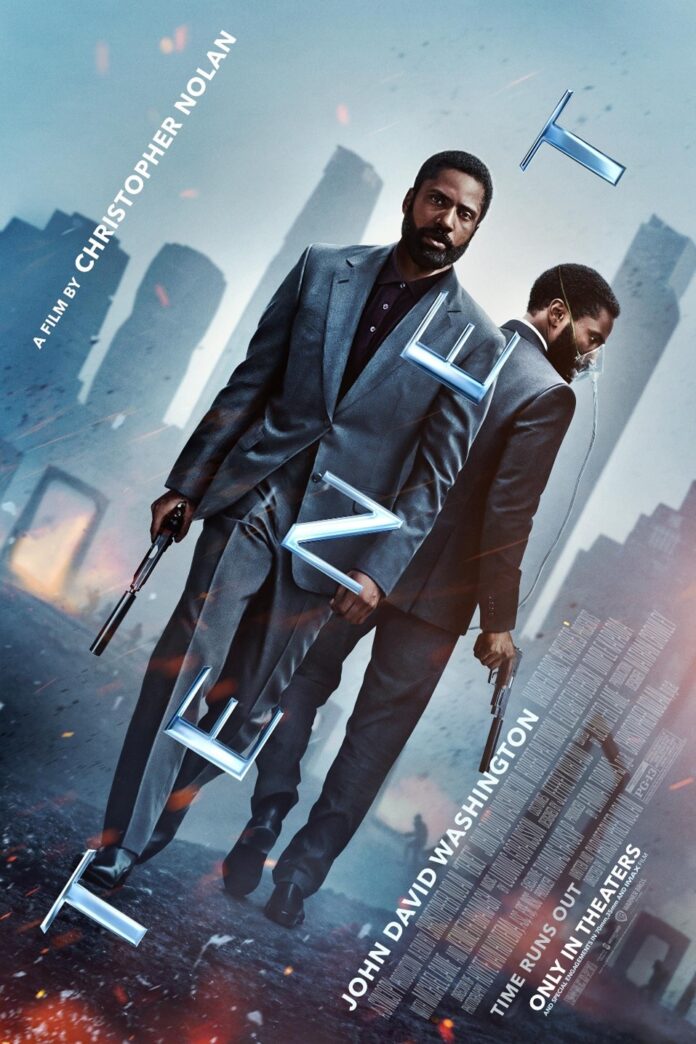 There is an assumption that films, especially big budget block-buster films that have a mass appeal must not make much demands on the viewer to make money. As long as it’s entertaining, you can leave your brain at the cinema’s ticket machines, so the approach goes.

Christopher Nolan’s films are different. His latest is the James Bond movie he never made. We have the borderless secret agent simply called ‘the protagonist’ played by John David Washington, his sidekick (Robert Pattinson), the Russian nuclear arms dealer villain (the worst from any film I can think of) called Andrei Sator played by Kenneth Branagh in top form, a trapped wife and art dealer played by Elizabeth Debiki, and a mysterious Indian woman who for most of the film plays a role similar to the Oracle in the Matrix.

It’s more than a straight-forward spy thriller, because the premise is that in the future technology is invented to ‘invert’ objects allowing them (and people) to reverse their path through time. What we see are fights in reverse, cars unflipping, buildings exploding and imploding, agents going forwards and backwards meeting together like counter-propagating tidal wavelets on a beach.

While Nolan’s smash hit mind-bending film Inception dealt with the fantastical world of dreams and mind heists, his latest mega-budget conceptual, time-flipping thriller Tenet is gritty, rough-and-ready and so ambitious in its head-spinning complexity, that is likely to leave audiences wondering what’s going on (especially in the third and last heist), while nonetheless pondering the conundrums and themes at play.

Some have criticised the film as being hard to follow. That’s true to a certain extent (the booming audio and thumping soundtrack don’t help a script in which every word matters). You can be sure that Nolan has the entire schema worked out in his head (and not in a smug way) and there is pleasure in unpacking it.

I would say it is not as enjoyable as Inception, but there might be more depth to it on further viewing and analysis. It has been said that Nolan is more of a puzzle maker than a poet and that the human, emotional aspects of his stories are mere add-ons to the technical framework he plays with.

That’s less the case here as the human, philosophical and even theological themes (including the nature of megalomania, heroism,  jealousy and whether time or trust is more important to friendship) are strongly intertwined with the sci-fi setting and story-telling through the medium of film (“sculpting in time” as Andrei Tarkovsky called it) of which Nolan is a modern master.