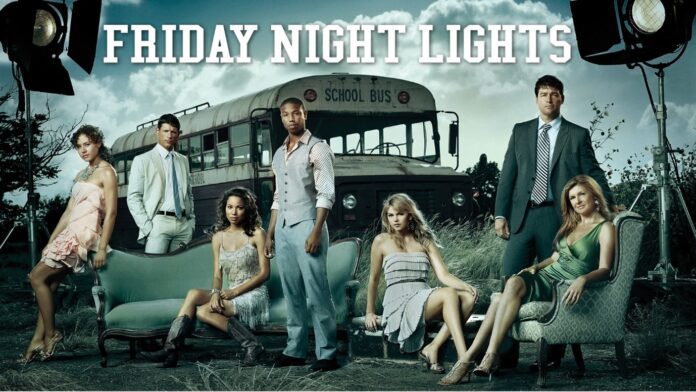 Having stumbled across a recommendation to read the book ‘Friday Night Lights’ by H.G Bissinger, as it created some controversy on how it addressed, and highlighted, the issue of race and class division in a Texas town where High School American Football dominates the weekly conversation. From an Irish perspective, the fascinating issue is far from identity politics, but the fact that tens of thousands would flock to watch high school kids play sports under the bright lights on a Friday night. If you think GAA brings community together, it doesn’t compare with the unifying spectacle of high-school football.

The book led to watching the film, starring Billy Bob Thornton, which disappointed, but it was the series that followed, 5 seasons and 76 episodes, that is the jewel in the crown. “Friday Night Lights” centres on the rural town of Dillon, Texas, where winning the state football championship is prized above all else. Coach Eric Taylor guides a high school football team through pressure-filled seasons while dealing with struggles relating to his own family. The interactions between the team members, current and former players, supporters, coaching staff and regular townsfolk address many of the issues facing small-town America.

The series is easy watching, compelling, heart-warming and to an extent, heart wrenching, at times. While the football is central to the story, the real stories are the characters that face everyday challenges in family, community and school. The stories develop in a very human way, underpinned in a non-judgmental manner, by the faith that is important to a Texas town. At a time where religion and faith gets little to no exposure in Hollywood or Netflix, except in a derogatory manner, how faith is presented throughout Friday Night Lights, is refreshing, and although not central, it is not hidden away.

When it is extremely difficult to find compelling teenage television that is not overtly sexualised, Friday Night Lights, available on Amazon Prime, is well worth a binge watch.