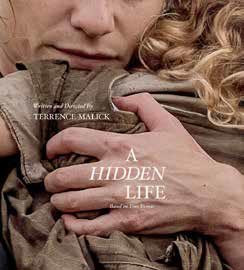 The latest drama from arthouse auteur Terence Malick (Badlands, Tree of Life), should be of much interest to Christians… but it isn’t.

A Hidden Life tells the story of Franz Jagerstatter, an Austrian farmer and Catholic martyr who was executed for refusing to swear an oath of loyalty to Hitler.

Inspired by his Catholic faith, Franz was the only man in his village to refuse conscription, and for this he gave his life. Though an intriguing subject matter, Malick fails to deliver on the dramatic potential of Franz’s story.

Malik effectively gags his hero, never allowing Franz to explain his motives or their origins. Because we now understand the evil of the Nazis and Hitler, it’s easy to accept Franz’s suffering, however irrational it may appear.

But for his wife Franziska, his mother, and his sister-in-law, all of whom are dependent on him for their health and happiness, his actions are frustrating. They are shunned by their friends and neighbours, shouted at and spat upon; they struggle for water and for food.

And yet, when Franziska confronts Franz, seeking to understand, he does no more than wring his hands. The only justification he ever offers for his resistance is that “I cannot do what I strongly believe to be wrong”. It’s fair to say that many Nazis acted in the strong belief that what they were doing was right! In saying this, he is not offering a justification from reasonable grounds – he demonstrates by will alone the significance of his resistance.

Malick’s style is distinctive, and that such a heavyweight would take on this topic has stoked the interest of many Christians. There are elements to praise in this film, like the extended depiction of Franz’s family life or some of his time in prison. Once in prison, there is at least a context in which his mute suffering is more appropriate.

But the overly picturesque and aestheticized depiction of nature and Franz’s home, the irritating habit of cutting non-sequentially or in the middle of lines, the voice-overs which distance one from the reality of the characters’ suffering – all rob the story of its beauty and power, and Franz of his distinctive, Catholic resistance.

Watching the film is like being invited to a party and then never being introduced to the other guests. You sit around, watching, but you can’t take part. What makes it all the more frustrating is that in reality, Franz engaged directly with questions of just war and Catholic teaching; though not a learned man, he spoke with a clarity which suggests divine intervention. What Malick produces is a pale imitation of the real thing.