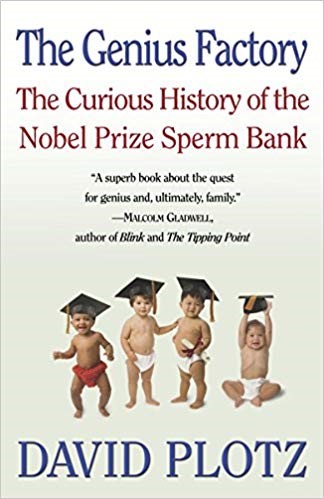 The Genius Factory, or the Nobel Prize Sperm Bank, was a fascination for many in the 1980’s after assisted reproduction started to become common place. Properly named, The Repository for Germinal Choice, was considered to be a radical human-breeding experiment, with a lofty name to cover the reality of how it functioned. Beneath the grandiose title was a mad scientist attempting to create a business from the desires of parents to have superior offspring, working in unhygienic conditions using very basic technology.

Though well known at the time, the laboratory quickly faded to obscurity as IVF and the like became more common and the services more readily available, however the impact of the ‘Genius Factory’ lived on in the lives of the children born with great expectations and with many questions about their origins and ancestry.

While Plotz avoids directly addressing the ethics of such endeavours, or artificial reproduction in general, he charts an account of the real lives created through the process and the struggles they endured.

Of the two hundred children created, Plotz explores the questions of what happened to them. Were they the brilliant offspring that Graham expected? Did any of the “superman” fathers care about the unknown sons and daughters who bore their genes? What were the mothers who were willing to pay for designer babies like?

Crisscrossing the country and logging countless hours online, Plotz succeeded in tracking down previously unknown family members-teenage half-brothers who ended up following vastly different paths, mothers who had wondered for years about the identities of the donors they had selected on the basis of code names and brief character profiles, fathers who were proud or ashamed or simply curious about the children who had been created from their sperm samples.

While not the tour de force of drama that might be expected, the story unfolds of lives lived, with many questions, confusions and heartache. Plotz tells a human story of breakthrough that has now become commonplace. The first person account of the author’s journey to the story is unnecessary and distracts from the more interesting lives that he seeks to uncover.